In order to be able to separate low-frequency signals (<10 kHz) from their environment spectrum of frequencies, a filter is required. A frequency filter built up with a single coil and capacitor is usually insufficient to transmit a (digital) signal in an undisturbed manner. With the sending of Morse signals, in which a carrier frequency is set to the ON and OFF (so-called A1 modulation) in the rhythm of an activated Morse-key, and the later digitisation of other information, the processing of signals as undistorted as possible after being received was needed in the ’70s.
When processing into digital signals, the shape and thus the frequency content (loss of higher harmonics) is affected when using a too narrow filter. This means that the widest possible frequency passage for the modulated frequency is required. In order to ensure the suppression of the secondary frequencies, at least one more extensive filter, a so-called bandpass filter, was necessary. A bandpass filter in its simplest embodiment is composed of two coupled single oscillator circuits. In the application of inductive and capacitive elements for the filter, the coupling is carried out with a capacitor. the inductive elements of the circuits must be tunable.

In the design of the bandpass filter, it was assumed that the manually entered Morse information could not be generated faster than with a speed of 75 baud, which corresponds to 75 bits (marks) per second, or a frequency of 75 Hz. In order to be sure of the least possible distortion for a small shift of the carrier wave for this Morse signal of 1500 Hz, for example, the bandwidth for the band filter is set at 200 Hz, the bandwidth is defined as follows: the bandwidth is that width at which the bandwidth the amplitude of the lowest and highest frequency -3 dB (about 0.7 of the Vmax) is attenuated relative to that of the central transmission frequency.

In order to keep the dimensions of the components for the filter limited, the structure was chosen with tuneable coils (self-inductance) in Ferroxcube (Siferrite) pot cores. The capacitors (capacities) to be used were also of a limited size. When choosing the pot cores, the high magnetic permeability of the Ferroxcube (Siferrite) material played an important role.

The formerly commercially available pot cores with dimensions of 18 mm Ø and 11 mm height and the code 2000N28 of the Siemens manufacturer were suitable for self-induction at low frequencies. The ų value, converted to the value for the inductance per winding in the square, was about 4000 nH /w2 at 1500 Hz. This value applied to the windings within the hermetically sealed pot core without an air gap. To be able to finetune the bandpass filter with the required centre frequency and bandwidth, the choice was made for pot cores with an air gap where the ų value for the inductance could be changed with the control pins to be fitted.

The quality factor Q per circuit and the coupling factor k jointly determine the bandwidth and flatness of the filter characteristic. For kΩ = 1.2 a virtually flat transmission characteristic is obtained. For larger values of kQ, a dip occurs in the middle of the passband. Both LC circuits must be adjusted on the same frequency. The BUTTERWORTH calculation was used to determine the connection of the circuits. 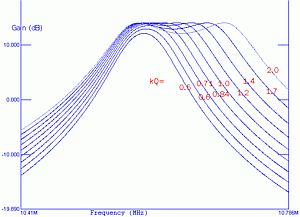 The attenuation for the frequencies outside the filter is first determined. Because the adjacent operating frequencies are further around 2000 Hz, a maximum bandpass for the filter of ± 1000 Hz is sufficient. With an effective bandwidth of 150 to 200 Hz, the ratio for the attenuation is then 2000/200 = 10. The filter tables determine for a double-tuned narrow band filter for n = 2 elements with an attenuation factor of 10 a suppression of at least -40dB in power corresponds to a voltage attenuation 100.

Figure 2 shows a two-circuit (two circuits L1 / C2 and L2 / C4) Butterworth narrow-band filter, coupled by C3, the value of which is chosen for a critical coupling of the filter parts. C1, C5 are coupling capacitors to adjust the filter impedance to the input impedance Zin and the output impedance Zout. The values for the coils L1 and L2 and the values C2 and C4 can thus be determined.

Calculation of C3 and Co

For the critically coupled test filter with 1500 Hz central frequency, which was shown above, the coupling capacitor C3 was kept at 820 pF to determine the deformation of this Morse signal at this narrow filter passage for the 75 baud Morse rate.

A subsequent diagram shows the filtering and further processing to a digital signal of a 1500 Hz modulated ON-OFF signal. The 1500 Hz supercritically coupled filter L1-C1 and L2-C3 (coupling capacitor C2 = 3900 pF) is followed by a transformer L3 (also equipped with a Ferroxcube pot core but without an air gap). This transformer is with a tap, adapted to the output impedance of the pass filter. With a double rectifier as a demodulator, the original ON-OFF Mandel signal (max 200 baud) is fed to the input of a fed-back operational amplifier IC1. The output signal serves as an input signal for a peak detector IC2, which generates a fully digital signal, switching between -12 V and + 12 V.