In 1977, the Physics Laboratory TNO celebrated its 50th anniversary. Computers and their use can be viewed as a late development within the laboratory with an explosive growth. The years 1964, 1970, 1971 and 1974 can be mentioned as the most important years with respect to the computer capacity of the Laboratory. 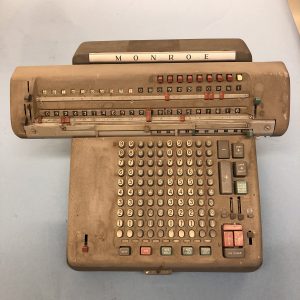 Prior to 1964, the aforementioned activities were carried out with the aid of table calculators by, among others, employees with the job description of arithmetician. This work took many man-hours. For instance, a matrix inversion of a simple 24×24 matrix took five man-hours behind, for instance, a MADAS, a mechanical table-top calculator with an electric motor.

In 1964, the first general purpose computer of the Laboratory arrived, an Elliott/NCR 803B. Shortly after its arrival, the system came under the operational management of a newly formed research group: “Mathematics/Operations Research“. This group had been the largest user of the central computer system from the outset.

The following input/output equipment was part of the configuration: a 5- and 8-channel 500-character/s (cps) papertape reader, a 5- and 8-channel 100 cps papertape punch, and later a Calcomp 563 plotter. The software consisted of an assembler, Algol 60 translator, a simple simulation package and a plotter package. Soon the work offer was such that use outside normal working hours proved necessary. An automatic telephone answering machine was designed at the Laboratory in order to be able to learn at home via the computer sound how far a specific program had progressed. If a parity error was heard, then they came to the Laboratory to repair the error.

Soon the volume of work grew to such an extent, that the system had to be operated outside the normal laboratory working hours. An automatic telephone answering machine was developed at the Laboratory to allow operators to listen to the computer’s loudspeaker after dialling-in from home. One could determine how far a specific program had progressed. If a parity error was heard, then one came to the Laboratory to repair the error.

In 1965, one envisioned that the speed and the input/output equipment was too limited for the anticipated use. In 1966, additional computer capacity was acquired by making use of the computer of the “Afdeling Bewerking Waarnemingsuitkomsten TNO” (which later became IWIS-TNO) as well. In the next years, additional computer capacity was hired at the neighbouring Shape Technical Centre (STC), the current NATO Communications and Information Agency – NCIA.

It took until 1970 before the Laboratorium was able to replace its computer system by a Control Data 3200 computer which was sufficiently powerful for the expected load. Such a replacement was already requested in the mid of 1967.

The Control Data 3200 computer had a memory of 32K words of 24 bits, a cycle-time of 1.25 microseconds and an extended set of peripheral equipment, such as hard disk drives, tape units, a card reader, a printer and a plotter. More on the Control Data 3000-series systems can be found on Wikipedia.

To control equipment such as an experimental phased array radar with a computer, an own developed Micro Electronic Computer was developed in 1970. More information can be found here.

In 1971, the computer configuration was enlarged with a Control Data 1700 minicomputer and an interactive graphics display, called Digigraphic. The users used a light pen to input coordinates or commands.
Among the peripheral equipment of the CD 1700 was a papertape station and an interface with possibilities to connect all kinds of peripherals. For the “Wargaming” project, a colour television monitor and slide projectors were connected via this equipment to the CD 3200/1700 computer system by means of own developed interfaces. The following software was used on the system: compilers for high-level computer languages, as Algol, Fortran and Cobol, as well as some computer packages.

Because of the rapidly growing use of computers, a large computer system was already thought of at the end of 1972. In June 1974, the CD3200 was replaced by a Control Data 6400 computer system. More about this later. Such a large mainframe system was only justified if ‘other users’ than the laboratory would also use this system for technical-scientific work for the Armed Forces.

That system was also used by the other laboratories of the National Defence Organisation (‘Rijksverdedigingsorganisatie’): the Prins Maurits Laboratory (PML) TNO in Rijswijk and the Instituut voor ZintuigFysiologie (IZF) TNO in Soesterberg) as well as the ‘Laboratorium voor Elektronische Ontwikkelingen voor de Krijgsmacht’ (LEOK) in Oegstgeest, and various engineering groups of the Armed Forces. In 1975, both the size of the computer system operations and the diversity of users gave cause to form a new group: the Computer group as offspring of the Mathematics/Operations Research group.