Each NOS/VE job had a current command list, which was similar to an MS-DOS or UNIX path. Apparently, entries in a command list could be libraries or catalogs (my notes on this are skimpy). An SCL procedure could be run by name if it was in a library in your command list, or by file name. If it were run by file name, the first PROC in that file was run. The same applied to executables.

The concept of a library of commands that could be invoked from a command prompt would be new to MS-DOS and UNIX users, but would be familiar to users of some other OSs, including older CDC operating systems. These libraries were called object libraries and were managed by a command utility called CREate_Object_Library. Using the object code utility (OCU), one could maintain object libraries.

Many CDC programs, including CREate_Object_Library, worked by creating a new file rather than directly modifying an existing file. This was safer than changing a file on the fly, though it did require more I/O and disk space.

The following sample session adds a procedure (the find_primes PROC sample) to an existing library. It also demonstrates information maintained by the file system, the fact that NOS/VE was apparently Year 2000 (Y2K)-compliant, and the fact that CDC was at least as fanatical about time precision as I am. You also see that back then, a lot of the CDC system maintainers liked to work very late at night.

Source Code Utility (SCU) was a source code maintenance program. It maintained libraries containing “decks” (files) consisting of lines of text, similar to today’s UNIX RCS and SCCS. Unlike RCS and SCCS but like CDC’s older UPDATE program, each line had a name consisting of a deck or modification name followed by an ordinal number of the line within that deck or modification.

In the following example, we use SCU to access an existing text library containing several decks, including CRETL, which is a CYBIL program. This deck contains lines added or changed by a previous modification with name SYSCLASS. We perform a modification named MRR1 using SCU’s sub-utility edit_library. Note that SCU was one of the few programs whose command didn’t follow the usual 3-1-1 naming convention. As usual, my annotations are included in double-quotes. 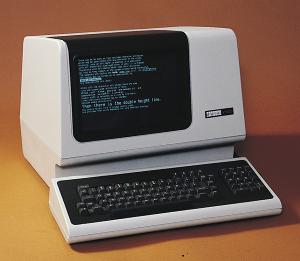 The system editor in NOS/VE was FSE (Full Screen Editor). If you had a “smart” terminal (i.e, a terminal like a VT100 (see picture) with escape sequences to move the cursor and the like), FSE was quite easy to use. (FSE looked at the terminal mode; see the sample prolog file.) Otherwise, you could still use the editor using commands similar to those in UNIX ed. FSE–a command utility–had a command name of EDIt_File. You entered FSE via:

Some of the common commands were:

line_number was an ordinal line number (like UNIX ed and vi), or an SCU line ID.

As in UNIX shells, multiple commands could be placed on a line by separating them with a semicolon. Here is a very short FSE session performed on the updated source code file created in the above example. It simply lists the first six lines of the file: