A “dome” is a streamlined envelope of the sonar transducer that serves to reduce the noise of the water streaming along with the bow of the ship. The submarine hunters of the Royal Netherlands Navy Frieslandclass lowered a dome under the ship with a transducer when the sonar was active. The dome could be retracted when the sonar installation idled. As discussed on the web page about the sonar measurement raft at the Roeleveense Plas in Nootdorp, the measuring raft was dimensioned with hatch dimensions (2 m x 4 m) to perform measurements on the domes of Friesland-class destroyers. The measurements aimed to measure over 360 degrees what influence the structure of a dome has on the sound emissions by the transducer and therefore on the sonar response.

The next series of destroyers of the Royal Netherlands Navy is called the S-frigates or Kortenaerklasse. These ships had a fixed dome at the bottom of their stem. This dome bulge is called a bow dome. Measurements were also taken on this bow domain at the sonar measurement raft of TNO Waalsdorp on the Roeleveense Plas in Nooddorp.

The dimensions of the S-frigate bow dome, such as of the HNLMS Callenburgh, however, were a lot larger than the hatch dimensions. The new bow dome could therefore no longer be mounted in the cabin of the measuring raft to the measuring mast. The heaviness of the bow dome also made the use of the small rail tracks less obvious.

Underwater mounting before the measurements 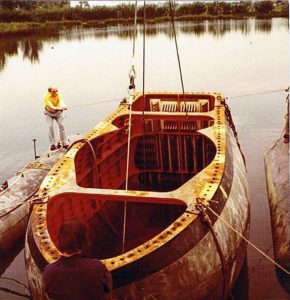 To properly position the whole frame and thus the bow dome under the measuring raft, winches are located at each of the four corners of the measuring raft as shown in the photo below. Moreover, the photo shows the floats of the raft at the right, the frame is below the water surface. The cables from the winches are coupled to the four corners of the floats and frame before sinking.
A winch was also located ashore. Its cable is connected to the two vertices on the long side of the frame. This winch is used to pull the frame (with the bow dome) from under the raft during the inlet of pressured air in the floats after the measurements.

The compressed air supply on the measuring raft consisted of four 50-litre industrial bottles with a pressure of 200 bar. Also, a 200 bar compressor was installed on the raft. For underwater work, two complete diving sets were available on the measurement raft. Two laboratory employees were qualified divers. They completed a one-month training with the Royal Netherlands Navy in Den Oever aboard the HNLMS Sumba. That training was a requirement by the laboratory because of the diver insurance policy. Every year, these employees had to re-qualify at the Dive Medical Center of the Royal Netherlands Navy in Den Helder. Also, there was an obligation to dive for an hour every week if no underwater work had taken place.

Before the bow dome arrived at the site, a submerge practice sequence of the frame with the two floats was conducted. Ballast was applied with approximately the same weight as the bow dome to measure. After connecting the winches to the corner points of the frame, the compressed air hoses connected to the floats and the cable connected to the winch ashore, the water inlet valves on the floats were opened. The three-way valves on the panel were then set to position 3 (let the air out).

Very slowly the floats with the frame then submerged. With enough slack of the ashore winch, the frame slowly disappeared under the measuring raft until it hung stable in the four cables of the four corner winches. After the winches had been tested, the whole raft could be lifted and removed by simultaneously blowing compressed air into the four compartments and continuously keeping tension on the cable from the ashore winch to pull the floats and frame aside from the measuring raft. To prevent compressed air hoses or hoisting cables to get caught behind the measuring masts, the masts were put in a high position during the submerged procedures.
The position of the winch cables showed that the floats and frame slowly arose from under the raft. After a while, the frame with the floats surfaced next to the measuring raft. After the valves on the floats were closed, the compressed air supply was also disconnected. After these preparations and testing of the system, the ballast was removed. The frame with the floats was then towed to the north side of the lake.

Preparing the bow dome for the measurements

To measure the bearing errors, the bow dome must be able to rotate over 360 degrees. The load on the large flange of the rotatable part of the measuring mast, however, was not equally balanced because the rear part of a bow dome is heavier. This prevented the bow dome from turning. This problem was solved by placing a lifting balloon at the rear part of the bow dome (see photo above). By blowing enough compressed air into the lifting balloon so that the load on the flange was equal all around, the motor of the large flange could turn the bow dome over the full 360 degrees.

Once the middle of the transducer in the bow dome on the main measuring mast and the hydrophone connected the rear mast had sunk to the same position of six metres below the surface, the mechanical setup was ready for the bearing error measurements in the form of a so-called sonar direction diagram.

The reinforcing ribs and the skin thickness (metal or polyester) of the bow dome disturb the sonar’s sound direction and observations. A transducer composed by the laboratory (1.00 x 1.25 m) was used to measure the bearing errors in the form of a sonar direction diagram. The transducer was mounted under the small flange of the measuring mast with a fixed arrangement, so not rotatable, aimed towards the rear mast with the hydrophone. The measured sonar direction diagram could be used in the operational use phase of the sonar under a destroyer to correct the perceived direction of the received sound.

At first, the transducer transmission level (in dB) was measured at different frequencies without transversing the bow dome. Then measurements were made with the bow dome in place while using a continuous signal with the same level and frequency as before. The bow dome was then rotated 360 degrees starting with the rear of the bow dome. At the same time, a paper recorder with the polar or linear paper was started so that the front of the bow dome was positioned in the centre of the linear paper after 180 degrees. When the bow dome is turned 90 degrees, the transducer and thus the directional diagram looks straight against the ribs and the metal or polyester skin. This provides little distortion of the sonar direction. From 90 degrees to 180 degrees, the transmission path is increasingly skewed by the ribs of the bow dome and the skin barrier. This could give a larger directional error. The same happens with the rotation from 180 degrees to 270 degrees. At 270 degrees, the transducer looks straight again at the ribs and skin barrier, which again gives little distortion of the direction diagram. Each direction diagram was measured both clockwise and counterclockwise.

Detaching the bow dome after the measurements

After the measurements, the bow dome has to be surfaced again. First, both masts of the measuring raft are placed in their highest position. The process now goes in reverse order: the water inlets on the floats are opened and the air valves are also opened. With sufficient slack from the ashore winch, the frame and floats submerge below the bow dome. The bow dome is slowly lowered to just above the frame. At the direction of the diver, the frame is pulled up with the four corner winches to the bottom side of the bow dome. Once the bow dome rests all around on the frame, the diver can begin to demount the measuring mast. The measuring mast is then lifted as soon as it is loose. The lifting balloon is also removed. Now it remains only to surface the whole combination. While the cable from the ashore winch is continuously kept under tension, compressed air is blown into the compartments of the floats. The ashore winch now pulls the floats with bow dome from under the measuring raft to aside when it rises. After surfacing next to the measuring raft, the water inlets and compressed air valves are closed. Finally, the four winch cables are disconnected. The bow dome is then ready for transport to the other side of the lake.