At the end of the fifties of the twentieth century, the Royal Netherlands Airforce 45th telecommunication service wanted to record intercepted encrypted and unencrypted military telex messages stemming from behind the iron curtain. In 1960, custom-built papertape punch machine PunchroPhyl was developed by TNO that could capture the received telex messages in papertape. This device was able to create 7-hole (4 and 3 tracks around the s [sprocket row) paper tape with the layout shown below.

A reader-decoding device was developed for reading the recorded communication. The device had four exchangeable read screens (Russian Siemens Code 7½ bits (RSC), Russian Machine Code 7 bits (CT35), Russian Baudot Code 12 bits (RBC) and the International Code Nr2 7½ bits (CCIT2)). The selected one was placed in the device. By foot pedal operation, the punched tape to be decoded moved in a Siemens punch tape reader which was connected to the device. The characters that appeared on the screen could then be noted on paper.

The printing of the messages was shortly later in 1961 another device developed, the SCRIBOPHYL (Typewriter with Cyrillic alphabet for Russian, International and Baudot Transfer Systems, PHYsic Laboratory).

To print the recorded messages, a custom-built digital controller for a typewriter called SCRIBOPHYL (Printer with Cyrillic alphabet for Russian, International and Baudot Transfer Systems, PHYsic Laboratory) was developed in 1961. SCRIBOPHYL processed the paper tapes with the encrypted and plain text telex messages. With the SCRIBOPHYL, partly built into a “standard government bureau”, telex messages could be processed in every existing telex code and printed on paper. Most telex codes use five information and two synchronization bits (papertape holes). With the information bits, 32 different characters can be displayed. First of all, the letters of the alphabet and some signs for the wagon functions of the telex equipment. To be able to transfer more information with the five bits, there was one five-bit combination reserved to switch to character mode and one combination to go to number/punctuation mode. Until a mode shift, the mode stayed constant: letter mode or number/punctuation character mode.

A different telex code is the Baudot code. It consists of ten information bits and two synchronisation bits. It is a so-called multiplex system of two telex channels. The first five bits belong to channel I, the next five bits to channel II. In the PUNCHROPHYL paper tapes, the code combinations for the channels I and II were punched successively. To read the information from one channel, the alternate characters had to be read.

The intercepted telex messages could be accommodated in the paper tape in various ways.

The table in (Fig.2) makes clear that a sign from the letter shift is not linked together with a sign from the number shift. For example, in the CCITT-2 code alphabet the A merges with the – sign, while in the R.B.C. code list the A goes with the number 1. There are 32 letter and 32 number combinations possible. The characters, which are stored in the different telex codes in the LETTERSHIFT mode, can be displayed in one shift position of the electric typewriter. The characters of the FIGURE SHIFT can be displayed with the other shift mode of the electric typewriter.

The PUNCHROPHYL papertape was read with a paper tape reader. The characters read appeared in a five-bit register of the “SCRIBOPHYL”. If the tape reader read a character, that character was stored in a memory (one-bit shift memory). A 0 through 9 encoding erased the memory. The memory element set the shift position for the typewriter. Together with the five-bit information register, the one-bit shift memory formed a 6-bit character. This enabled a total of 32 letter combinations plus 32 number combinations to be printed. A code converter converted the 6-bit code into a signal on one of the 64 outputs (32 for letters plus 32 for digits). These outputs were linked to the entry side of a code card. A code card was developed for each kind of telex code. Via this code card, the incoming signals were converted to the output side via the code converter. With the converted 6-bit information, a single typewriter coil was energised. The letter, number or punctuation mark symbol associated with this coil was then printed on paper. The code cards were two-sided circuit boards with printed wiring. These printed circuit boards were equipped with 64 input and 56 outgoing contact paths. The incoming lines could be connected to every outgoing line. By placing a code card for a particular telex code in the SCRIBOPHYL, a telex message could be printed on paper. The incoming signals on the code card were thus connected to the correct outgoing lines of the code card. In order to reduce the number of code card exchanges, four code cards were simultaneously present in PCB holders that were built into the desk drawer. The selection for a specific code card was carried out with a switch on the control panel.

As stated above, encrypted telex messages contain 32 different characters. These characters were represented by 32 different characters using the letter shift. With the SCRIBOPHYL, it became possible to display a received encrypted telex message written in any of the telex codes. If we presented a crypto message bin the telex code for the Latin alphabet, then the wagon functions and ‘five work’ (= code combination 00000) of the typewriter were replaced by Russian letters which do not appear in the Latin alphabet. Conversely, with such a telex message in the telex code for the Russian alphabet, the typewriter wagon functions and ‘five work’ characters were replaced by Latin letters which in turn are not present in the Russian alphabet. In this way, there was an exchange for the wagon functions with non-existent codes for the selected alphabet. The letters used for the typewriter wagon functions and the ‘five work’ are included in the table below.

Only the characters with information were written with the typewriter. As previously discussed, the information in track 6 of the papertape provided for this. The control of the typewriter provided a layout in groups of 3, 4 or more characters so that encrypted messages stood out. In order to be able to make notes next to the groups, the horizontal distance between the groups to be written was made adjustable, for example: abcd pqrs tuvw xyza aklm nijm fgps aouy

This format had the advantage of discovering equal parts or certain patterns in the text (the message) faster. This facilitated deciphering cryptographic messages. The format to be used was derived mechanically from the position of the tabular rail of the electric typewriter. This was easy to set up with the set and reset button of the typewriter.

It could also happen that the paper tape was punched by the PUNCHROPHYL in an inverted way. The 1 was punched as 0 and a 0 was punched as 1. Inverting backward could be done by the SCRIBOPHYL.

In order to be able to operate the paper tapes, there was a fast papertape winder/reader capability. This device could keep the paper tape tensioned while reading the papertape. It was also possible to quickly wind the reels left or right. Fast-forwarding became necessary when long information-free parts were present in the punched paper tapes. Fast-forwarding prevented loss of time. It was also possible to go quickly to the beginning of a papertape. This was important for processing information that was punched in the two-channel Baudot code.

Technical design of the SCRIBOPHYL 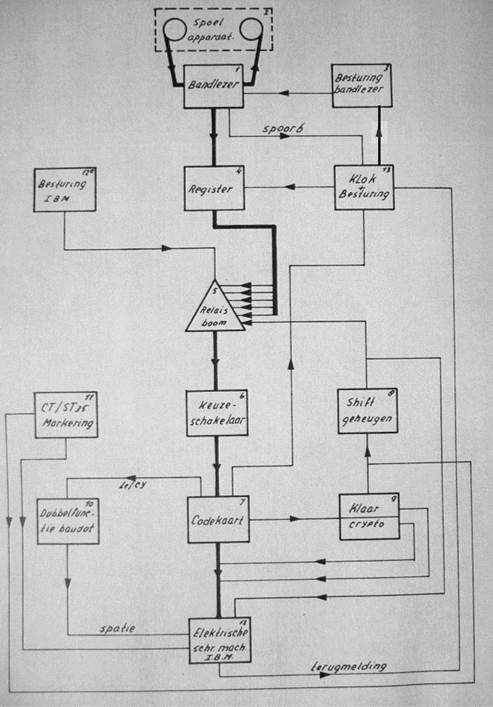 The following units can be distinguished in the drawing (numbering at the top right of each of the blocks):

The input consists of:

The code converter consists of:

The IBM typewriter with its controls:

The system clock and clock control:

The perforated tape consisted of a paper band (strip), in which the information is encoded in round holes were punched, arranged in five or eight rows. From the early 1950s to the end of the 1970s, it was a widely used computer medium for both data and software storage. The paper tape strip was about 2 cm or 2.54 cm (inch) wide. The mechanical specifications, which both the unpunched and punched paper strips had to comply with, were laid down in the so-called ECMA standard 10 (ECMA-10) (ECMA-10). This standard was maintained until the mid-70s of the twentieth century.

In five-hole papertape, the five information bits were written perpendicular to the tape, three on one side and two on the other side of the smaller transport holes (so-called sprocket holes). Because five bits (holes) were too little for data storage, the storage on the paper tape was later enlarged to 8 holes in a row (five and three). In the eight-hole papertape, so-called ASCII characters were punched either 6, 7 or 8 bits of data. Many coding methods were in use. In order to deal with errors in punching and reading, there was sometimes a parity bit added. This special bit, recorded in one row, caused the total sum per column to be odd. The paper tape reading device stopped when an even number of holes were read. It was then up to the operator to ascertain the error and record it by means of a note on the print report.